To be a (business) woman in Saudi Arabia

In the week that Saudi Arabia became the last country in the world to permit women to drive, you may be forgiven for thinking that the Gulf is only just waking up to ideas such as women’s rights and equal opportunities. However, issues that have dominated the Western news agenda in recent times such as the gender pay gap, female representation on boards and in politics have been talked about for decades now in the Middle East at round tables and parliamentary sessions.

Change does not always happen quickly in the Gulf, which is why the pace of reforms introduced in Saudi Arabia over the last twelve months has been so remarkable. Following the law change on women drivers, crown prince Mohammad bin Salman indicated on his tour of Apple’s headquarters in California earlier this year that he would allow men and women to mix freely in the workplace, in an effort to attract more foreign investors (and Apple stores). This clearly fits in with one of the priorities of the Saudi Vision 2030 which sets out a target to increase female participation in the workforce from 22% to 30%.

Is all of this actually bolstering the number of female business executives reaching a senior level? There are some high-profile examples; in April this year Aramco appointed Lynn Laverty Elsenhans as its first female board member, and Sarah Jammaz Abdulla Al Suhaimi has been chairwoman at the Saudi Stock Exchange (Tadawul) since 16 February 2017. We also noted that other large Saudi companies such as Samba Financial Group, Alawwal Bank, Kingdom Holding Company, Saudi Cement Company, and Batterjee Holding Company all have female representation on their boards.

For a more data-driven approach, Diligencia used our own proprietary data to look at Saudi female individuals holding either a board seat or a significant share within companies. Applying our ‘Relationships indicator’, we found the top 10 women with the most corporate interests (both directorships and shareholdings) in Saudi Arabia: 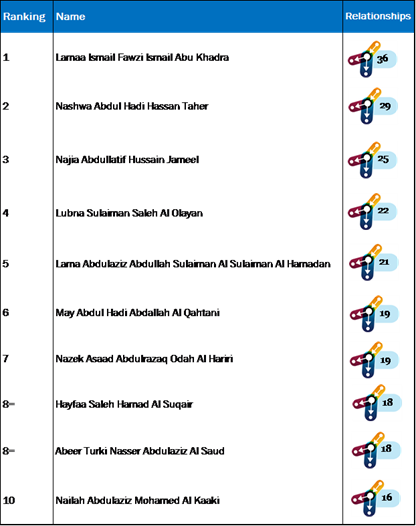