Building a state within a State: NEOM and the new future of Saudi Arabia

Anyone who has lived and worked in the Gulf is probably accustomed to seeing new roads, buildings, sometimes whole cities erupt from the desert landscape in staggeringly short periods of time. Ambitious new infrastructure projects – ranging from shopping malls, residential developments, mass transit systems and tourist attractions – are seen by traditionally hydrocarbon-rich countries as the key to diversifying their economies by attracting businesses, workers and tourists.

There is almost always a competitive edge to these efforts, whether it is in building the tallest tower (currently the Burj Khalifa in Dubai), offering the most flight connections to and within the region (Emirates) or being seen as the most business-friendly jurisdiction (it depends which ratings you believe).

Strategic ambition
With Saudi Arabia’s NEOM project, owned by the Kingdom’s sovereign Public Investment Fund, the competitive stakes and scale of ambition have been raised to stratospheric levels. Even the name – created from ‘neo’ or new and mustaqbal (Arabic for ‘future’) – makes a statement of intent. Billed as a key driver of the Kingdom’s 2030 strategic vision, NEOM is more than ‘just’ a city; in fact it will have several, including The Line which has been marketed as a carbon positive city of the future, powered by 100% clean energy1, and where its projected population of 1 million will live and work in communities accessible either by walking or integrated public transport. At 26,500 square kilometres (bigger than the country of Belgium if you need some perspective) the entire development of NEOM will when finished house eight industrial sectors, a port, airport and a number of tourist resorts.

Reading NEOM’s publicity material, the idea seems at least to make strategic sense; the area slated for development is in a quiet corner of north-west Saudi Arabia on a 450km stretch of the Red Sea coast so far untouched by the type of tourism seen not far away in Sharm El Sheikh and Eilat. Much of the world’s trade passes by on its way to the Suez Canal and (once the airport is built) 40% of the world’s population will, we are told, be able to travel there in 4 hours or less. According to the same publicity (which has, I should add, been corroborated by a source who works on site) the temperature in the coastal location is generally 10 degrees lower than the rest of the country. What’s not to like? 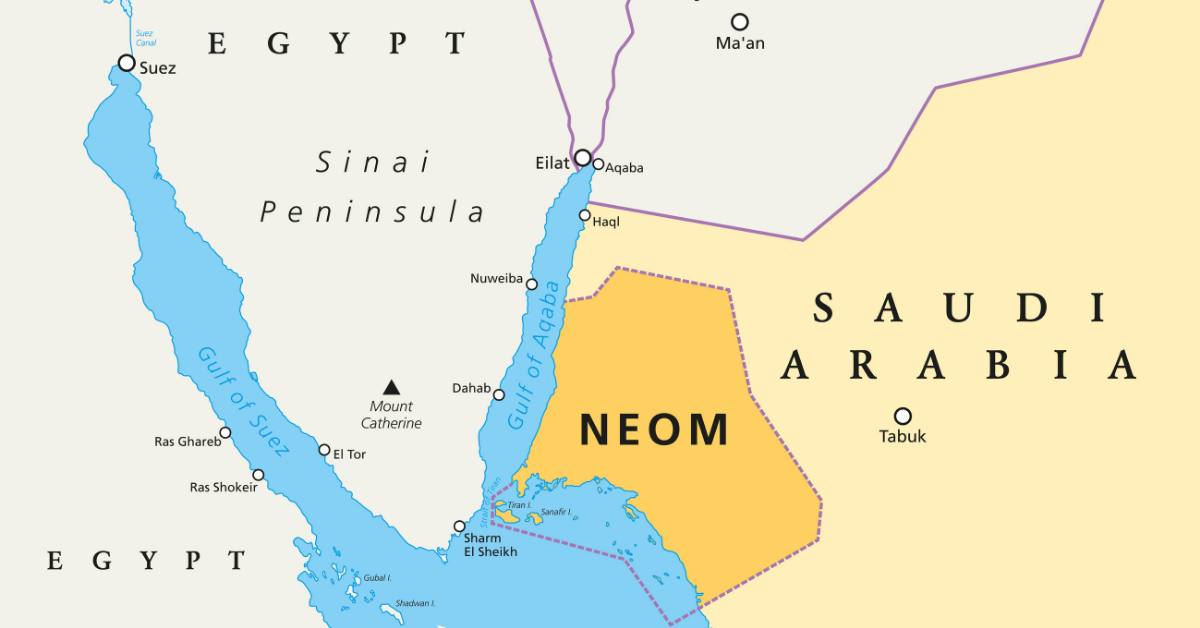 Progressive laws
Perhaps more interesting than the massive scale of the promised infrastructure, is how NEOM is being presented as a place to do business. The entire area will be one enormous special economic zone with its own set of “progressive” laws and regulations. These have not been spelt out in detail, and may not have been finalised yet, but Saudi Arabia may look to borrow ideas from the UAE’s playbook by looking at areas such as foreign ownership of companies, property ownership, even the relaxation of its current conservative attitudes towards dress, entertainment and the consumption of alcohol, particularly in NEOM’s planned tourist resorts.

Whilst there has been some liberalisation of cultural norms in recent years with the (re-)introduction of music events and cinema, this still represents a radical departure for a Kingdom that depends for its stability on a balance between the various constituent elements of Saudi society, not least the influential religious clerics. The idea of creating this state within the State may be the only currently achievable way of reaching a compromise between what is still a deeply conservative society and the needs of modern businesses, residents and travellers. And let’s not forget that for international companies there is both carrot and stick at play here, since it was announced earlier this year that any business looking to win work in Saudi, particularly from the government, would be required to establish its regional headquarters in the Kingdom.2

Challenges
Whether or not the ambitions of Crown Prince Mohammad bin Salman, who is personally overseeing the whole enterprise, will come to be realised is an open question. For a project that has yet to break ground in any meaningful way, the most immediate issue is whether the world’s already stretched supply chains will be able to meet the needs of the world’s most ambitious infrastructure project. Quite apart from the human capital required; I am told that the number of employees based at the project site will grow from 1,500 currently to more than 2,500 in 2022. Doubtless US-based Aecom, which is acting as primary project manager on different aspects of the project, is aware of the size of the opportunity and risks involved.

It may be easy for some observers to dismiss NEOM as another white elephant in the making (King Abdullah Financial District, anyone…?) but what cannot be doubted is that Saudi Arabia has the ambition and the financial firepower to match, with at least US$500bn earmarked for the project. If they can make it happen, we may well be witnessing the beginning of the new future of Saudi Arabia.

Diligencia provides legal entity data at scale for emerging markets across Africa and the wider Middle East. Our vision is to deliver clarity, inform opinions and enable decision-making for clients in jurisdictions often poorly served by accurate public domain information.

For more details and information on which contractors are working Saudi Arabia’s giga-projects, see our article ‘Saudi Arabia pushes on with giga-projects supported by web of local contractors’ produced in collaboration with Gulf States Newsletter.