Bids for Chelsea FC: who are the ‘Saudi Media Group’?

Roman Abramovich’s decision to put Chelsea Football Club up for sale (shortly before he was sanctioned by the UK government for his links to Russian president Vladimir Putin) has already attracted a number of potential buyers.

According to Tuesday’s newspaper headlines these include a bid by a consortium calling themselves the ‘Saudi Media Group’, led by Mohamed Abdulilah Al Khereiji who is himself reportedly an ardent Chelsea fan.

In the absence of a publicly accessible registry of corporate data in Saudi Arabia, much of the UK press has (mis)reported that Saudi Research and Media Group – a large State-owned conglomerate which owns a number of newspapers, publishing houses and media interests in the Kingdom – is behind the bid. Diligencia can reveal that in fact the entity in question is Saudi Media Company for Advertising, a wholly-owned subsidiary of Engineer Group, a Riyadh-based holding company owned almost entirely by members of the Al Khereiji family. 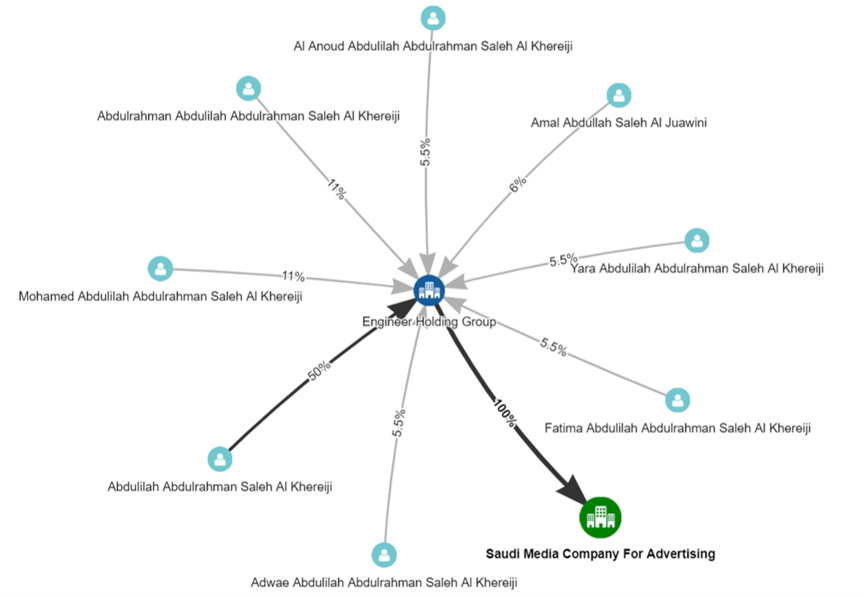 With the dust still settling on the acquisition of Newcastle United FC by the Kingdom’s sovereign wealth fund, attention will almost certainly turn to whether this new bid is likely to face any challenges under the Premier League’s owners and directors test – in particular whether the bid is directly linked to or being supported by the Saudi government.

An initial look at Engineer Group’s corporate structure on our online platform ClarifiedBy.com reveals an eclectic range of investments in the hospitality (Elegant Hotels) and catering sectors, as well as its principal asset, Arabian Contracting Services Company, otherwise known as Al Arabia or Alarabia OOH. This outdoor advertising services company, backed by regional broadcasting giant Ara Group (better known as MBC), went through an IPO process in November 2021 and is likely to have returned something in the range of US$400m to the Al Khereiji family – a healthy profit but only enough to cover a down payment on its rumoured US$2.7bn bid for Chelsea. Despite rumours of involvement by Saudi Telecom Company chairman Mohamed bin Khalid Al Saud, we will have to wait for confirmation of the other financial backers that form part of the Al Khereiji-led consortium.